When Lighting Strikes Close to Home – Surge Protection Can Help

When Lighting Strikes Close to Home – Surge Protection Can Help

Recently, in Cleveland, Ohio a family awoke to a loud bang that sounded like an explosion. It turned out that a bolt of lightning had likely struck the tree in their front yard, which then tore up their driveway, ruined their car, and blew out the electrical system in their home. Had the homeowners used a surge protection device (SPD) in their home, it could have prevented much of the electrical damage.

In addition to being extremely dangerous, lightning strikes can create enormous expense for homeowners unlucky enough to experience them. SPDs are a cost-effective way to prevent these incidents, in many cases costing less than a homeowner’s insurance deductible.

Chirico Scientific offers Surge Protection Devices that will protect all of the branch circuits exiting your home’s Load Center (circuit breaker panel) from damage caused by lightning induced surge events like the one in this news story. We often assume that damage is caused by a direct strike; but as in this recent incident, it is far more commonly caused by a nearby strike. This is because when lightning strikes nearby, it causes the ground (earth) potential to rise significantly by hundreds or even thousands of volts. This rise in ground potential also causes your home’s electrical system’s ground potential to rise. When this happens the laws of physics demand the potential difference to be equalized. The equalization of the potential difference is almost as fast as the lightning strike itself. The massive surge of current bursts through the home’s electrical system destroying wiring, outlets, switches, electronics, appliances, and everything in its path. 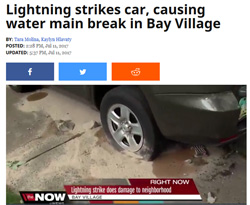 Chirico Scientific offers homeowners a line of SPDs that are used in commercial and industrial applications. These products are trusted by companies like Verizon, AT&T, T-Mobile and many others. These SPDs come with a 10 year no fuss warranty, and yet, are priced right for residential use. Contact Chirico Scientific and let us help you protect your valuable property.

About the Author: Joseph Zullo

Joe is the general manager of Chirico Scientific, LLC. He has dedicated his 20-year career to keeping facilities protected. He has worked with such notable manufacturers as MTL and Pepperl+Fuchs in the field of process automation and is an expert in applications and product implementation for hazardous areas. Contact Joe with questions by leaving a comment below, or via email at jzullo@chiricoscientific.com.